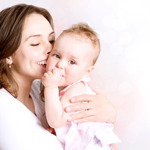 Birth is one of lifeʼs most traumatic events. Even when delivery is natural, the spine, the cranial bones, the majority of muscles, and the nervous and skeletal systems can endure a lot of stress, tension, pressure and twisting. Chiropractic doctors are skilled at detecting and treating the neuromusulosquelletic problems of newborns who may occur when they come into the world.

Then, babies discover the world of crawling and walking. In addition to learning to support their heavy heads during these formative years, they take numerous tumbles, which can have an effect on their spine and joints.

The techniques used on newborns are clearly not the same as those used on older people.

As they grow, children experience many falls and accidents in their daily activities. They also often carry themselves with incorrect posture for long periods of time, particularly when drawing. Then, they go off to school with their heavy and poorly adjusted backpack. Later, they become one with technology, either video games or computers. While they text their friends to stay in the loop, they have their necks bent downward over their cell phones. All of these stages in life can lead to growing pains and compromise the optimal health of the child or adolescent.

If your child complains of pain or discomfort, it may be time for a chiropractic examination. A simple visit to the chiropractor could help identify weaknesses, such as scoliosis, in the nerves, bones, joints or muscles. Don’t forget, prevention is the key to achieving and maintaining good health.

Why are children more prone to ear infections than adults? The cause is physiological. The adult ear canal (Eustachian tube) sits at a 45 degree angle. At birth, the tube is horizontal and remains this way until early childhood. Due to this horizontal position, ear fluid may not drain like it should, which makes it prone to infection. One way to help rectify this problem is getting a chiropractic adjustment.

As a holistic healthcare provider, Dr. Pascal Paquet, chiropractor, D.C., takes a preventive approach. He only believes in drugs that provide benefits, not all of the others that are not necessarily stopping the infection nor preventing future ones.

Following a major study on children with acute otitis media (AOM), researchers reported that chiropractic adjustment “reduced the number of episodes of otitis media and surgical procedures, and increased the number of months without surgery compared to children with standard treatment” (Arch Pediatr Adolesc Med 2003 157: 861-866). Pediatric adjustments are safe and effective as chiropractors adapt their technique according to the age and weight of each child.

In a study on 429 children, all under the age of 3, there were no significant differences between children with spandrel drain and others: “Children can have liquid in their ear canal and suffer from hearing loss for more than three months without any measurable effects on their development during the first three years of their life.” If doctors follow the results of this study, it means that many children can avoid a drain and that parents and doctors will not have to worry about possible development delays following the decision to avoid surgery. (Child Health Alert 2001: 4)

Scoliosis is a lateral curvature of the spine that usually bends to the right in the upper back and to the left in the lower back. Most people who have scoliosis only have very mild curvatures that pose little threat to their health. However, in approximately 5% of those aged 10 to 14 years (60% to 80% are female); these curves are severe enough to be qualified as clinical cases.

Chiropractors are professionals that can help detect scoliosis in its early stages. Detection is the key to preventing progression. Although screenings in schools detect some cases of scoliosis in their early stages, studies have shown that screenings alone are not sufficient.

What happens if your chiropractor detects scoliosis? In many cases, your chiropractor can treat it. More severe cases, however, may require the opinion of another healthcare provider. Nevertheless, in any case, the key is early detection. So do not delay, make an appointment for your child today for a posture evaluation.

Hormonal changes during pregnancy cause ligaments to loosen triggering imbalances in the vertebrae and hips. These imbalances are associated with a condition called vertebral subluxation and can cause pain and discomfort. The last thing a pregnant woman needs! Increasing abdomen weight creates a stress on the lower back and pelvis. Chiropractors are trained professionals who diagnose vertebral subluxations. They adjust them through gentle and effective movements called chiropractic adjustments.

It is known that regular chiropractic care can make pregnancies easier, more comfortable, reduce the use of analgesic by half during labour and reduce labour by 24% for a first child and 39% for a second child. Would you not like to get all these benefits during pregnancy?

According to the chiropractic wellness philosophy, the body works as a system rather than isolated parts. Therefore, chiropractors take care of the entire body, not just the spine (or any specific condition). The result is a revolutionary approach to wellness that brings major changes to the lives of many patients.

Are chiropractors really different from other doctors? They go directly to the source of the problem. Dr. Pascal Paquet, chiropractor, D.C., focuses on the cause of health problems, not on the patient’s symptoms. Working on underlying causes of health problems, Dr. Pascal Paquet, chiropractor, D.C., helps the body heal itself, instead of simply masking symptoms while the problem gets worse. This focus on the underlying causes is what makes chiropractors prevention specialists. They try to identify potential concerns and stop discomfort and illness before they become chronic. Even if you are not in pain, regular chiropractic checkups can help ensure optimal health, as the health of the spine is the foundation of the chiropractic approach to wellbeing.

Chiropractors focus their efforts on identifying and correcting dysfunctional areas in the spine, vertebral subluxations, which occur when there are misaligned vertebrae or when movement is restricted. Minor vertebral dysfunctions are associated with several disorders such as back or neck pain, carpal tunnel syndrome, ear disorders and respiratory problems. Chiropractors use gentle and effective movements called chiropractic adjustments to correct vertebral subluxations and to prevent their recurrence.

If you keep your wallet in your back pocket, alternate the pockets. Never sit on a wallet, as this can misalign your hips.